← KC Teams up with Geoff Swain
KC Travels back to India →

Only last month I was at AlMouj Golf in conjunction with the HSBC series performing twice the tricks with double act partner Geoff Swain.

This time I was back at The Wave, Muscat as a solo entertainer performing the KC Golf Show to help celebrate the clubs open day. Many activities were laid on throughout the afternoon creating a very friendly/family feel to the occasion. 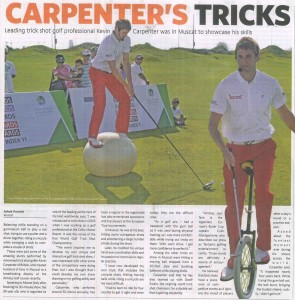 As a golfing community, the sport is still relatively new to Oman, so it was great to see many new golfers having a go.

One cheeky little monkey decided to play me at my own game  by throwing two balls down the pipe at once, which as you can imagine came as quite a shock when both balls popped out the bottom of the tube!

Having caught my breath after the show, I spoke with sports editor Ashok Purohit. The feature was covered in the ‘Muscat Daily’ and was kindly passed on to me by Louise Daly of Almouj Golf.

Within a few days I was back in the UK teaming up with my sidekick Geoff Swain at the London Golf Show performing Twice the Tricks at the Earls Court Arena.

This entry was posted in The Show. Bookmark the permalink.
← KC Teams up with Geoff Swain
KC Travels back to India →